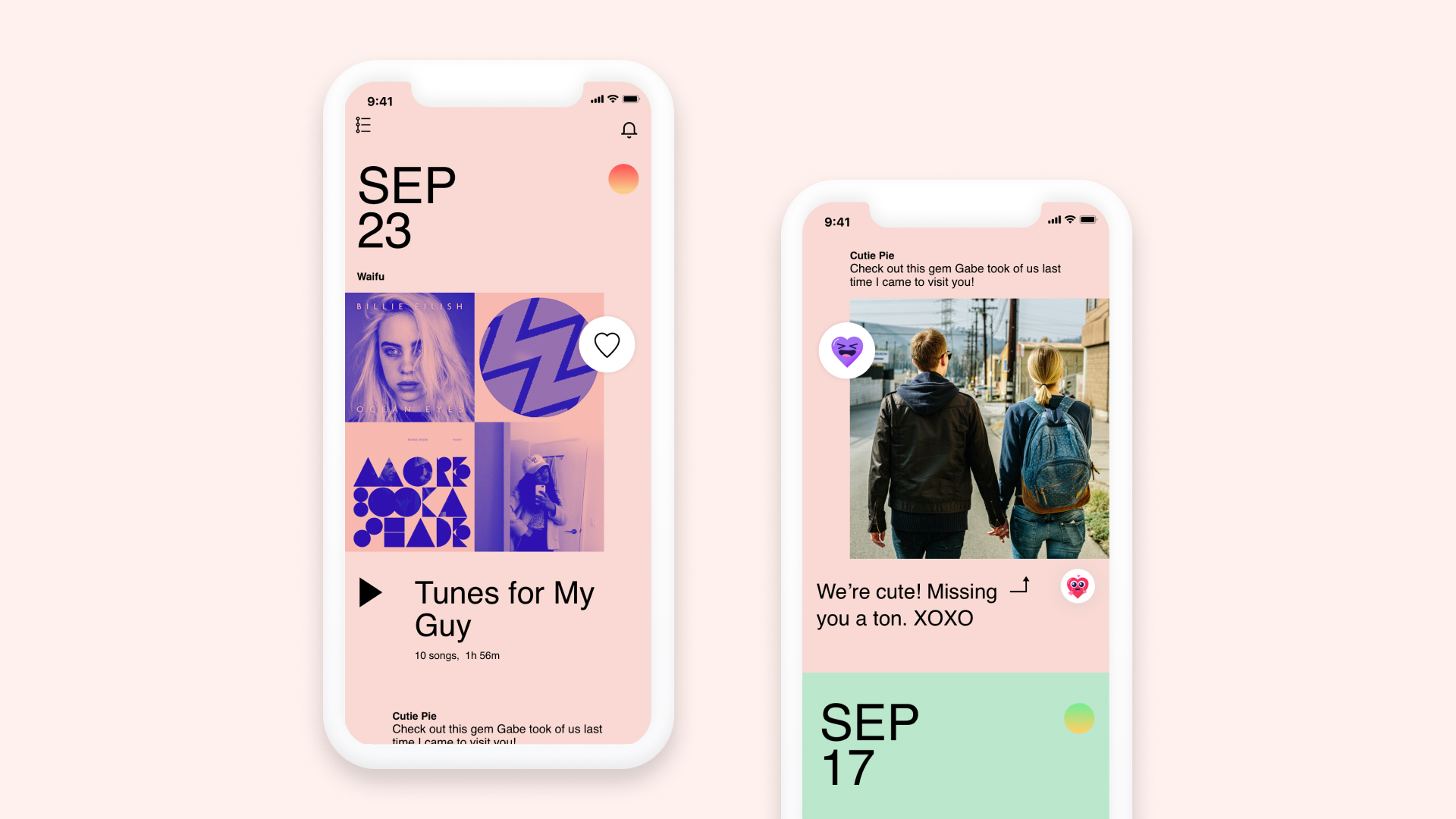 The Tuned app is new on the scene and offers a unique way for couples to feel connected to each other in a personal, digital space. Couples on Tuned can use a variety of features designed to help them express their creativity and share their warm, fuzzy feelings with their partners.

When we joined this work in progress, Facebook's New Product Experimentation (NPE) team had already put together initial concepts for all its first-release features as well as designed the fun illustrations and polished UI styles seen throughout the app. They realized that they had more on their plate than their solitary designer could realistically complete before the team’s deadline, so, at that point, Underbelly was called in to lend a hand and bring our UX expertise to the table. Over the course of four weeks, we were able to take several rough concepts and expand them into fully realized features that could be handed off to development.

Because this project’s time frame was so short, a highly collaborative working relationship was even more crucial than usual. We got up to speed on the project quickly and met daily with the NPE team’s designer and product manager to share ideas and solicit feedback so we could keep moving at lightning pace. Although the name of the game was speed, we made sure that we took enough time to carefully consider each decision we made. It’s important to all of us that we handle matters related to people’s romantic relationships with care. We strived to ensure that each interaction we crafted contributed to the feeling of a safe space and respected each individual’s privacy and feelings.

“The goal was to allow users to express their feelings creatively while keeping them from being overwhelmed or slowed down by too many choices.”

One of the many ways that users can share with their partner in Tuned is through short text notes, so we designed several options for the text composer that users interact with to create them. We worked with the NPE team to provide the right degree of customization through variable fonts, colors, and sizes. The goal was to allow users to express their feelings creatively while keeping them from being overwhelmed or slowed down by too many choices.

For Your Eyes Only

Photo posts are one of the primary ways for couples to share with each other. It’s no secret that sometimes that stuff is, well … personal. We designed a feature that allows users to tag their photos as private so they will be obscured in the feed, giving users control of when (and where) they view the content in full. We wanted to communicate this concept clearly and intuitively without relying too much on written content. The final filter design gets the message across while maintaining the app’s light, fun visual language. 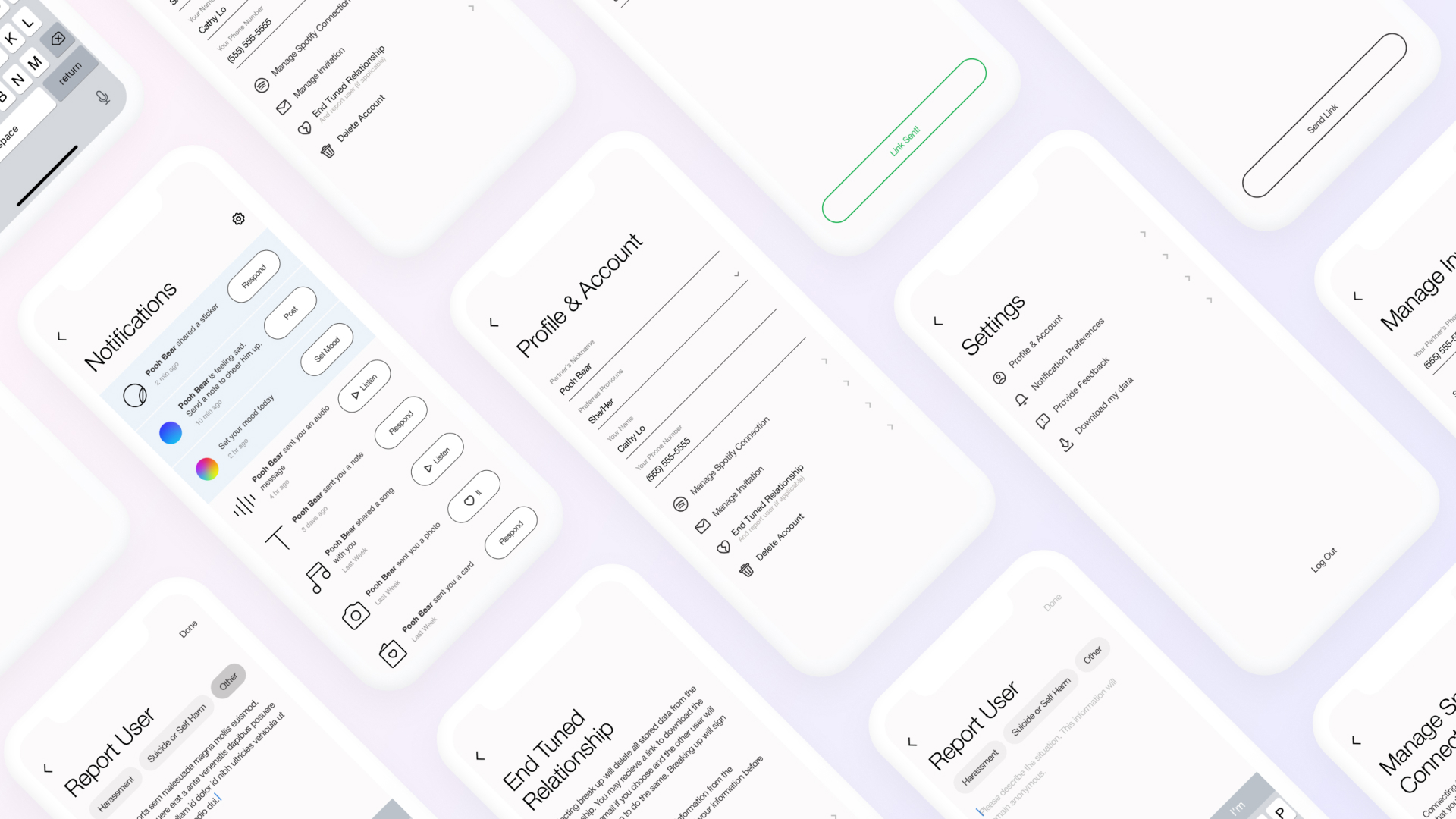 The heart of the Tuned app is its fun atmosphere and visuals. Throughout the experience, controls and buttons take a back seat to the creative content. Users still need access to more utilitarian parts of the app, such as settings and notifications, so we wanted to make sure that those entry points were visible but not distracting. The pages themselves also follow a simple structure and design, allowing users to navigate easily or make changes without much friction. 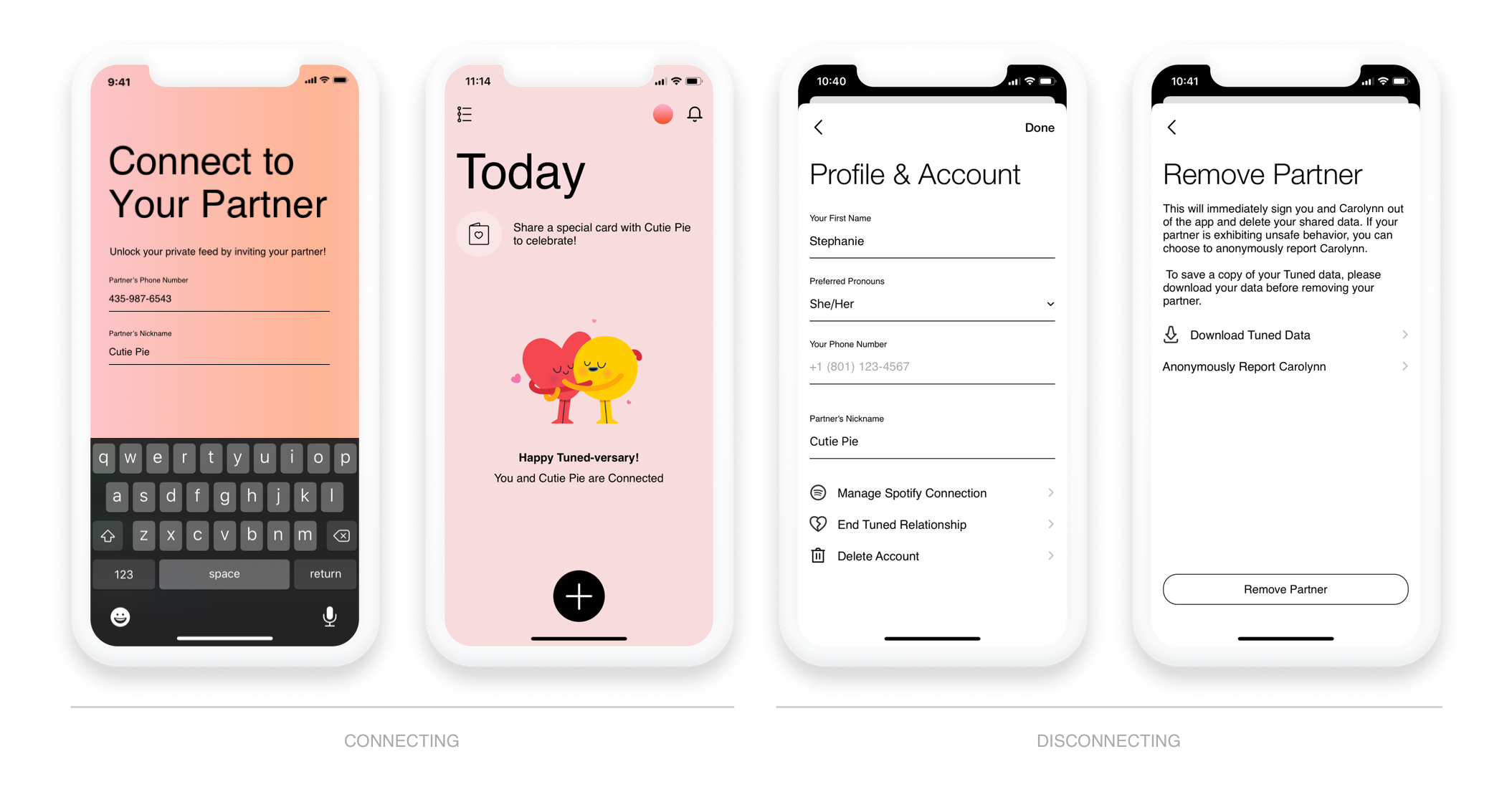 Onboarding is a crucial part of any app experience. We aimed to help people establish an account in as few steps as possible. This included functionality that allows users to invite their partner to the app and that gives them a tour of the space while they wait for a response. It was important to consider the tone of the app throughout these steps. Because getting set up and connected on Tuned can be fun and exciting, we took the opportunity to make each step feel upbeat and celebratory.

On the flip side, we know that not everything lasts forever, so we designed a way for users to end the relationship with their partner. We wanted to treat these circumstances delicately, so we worked closely with Tuned’s content strategist to safeguard the feelings of our users. Our goal was to lead users as tactfully as possible through processes such as disconnecting from their partner, downloading any data they want to keep, and, in some cases, reporting the other user 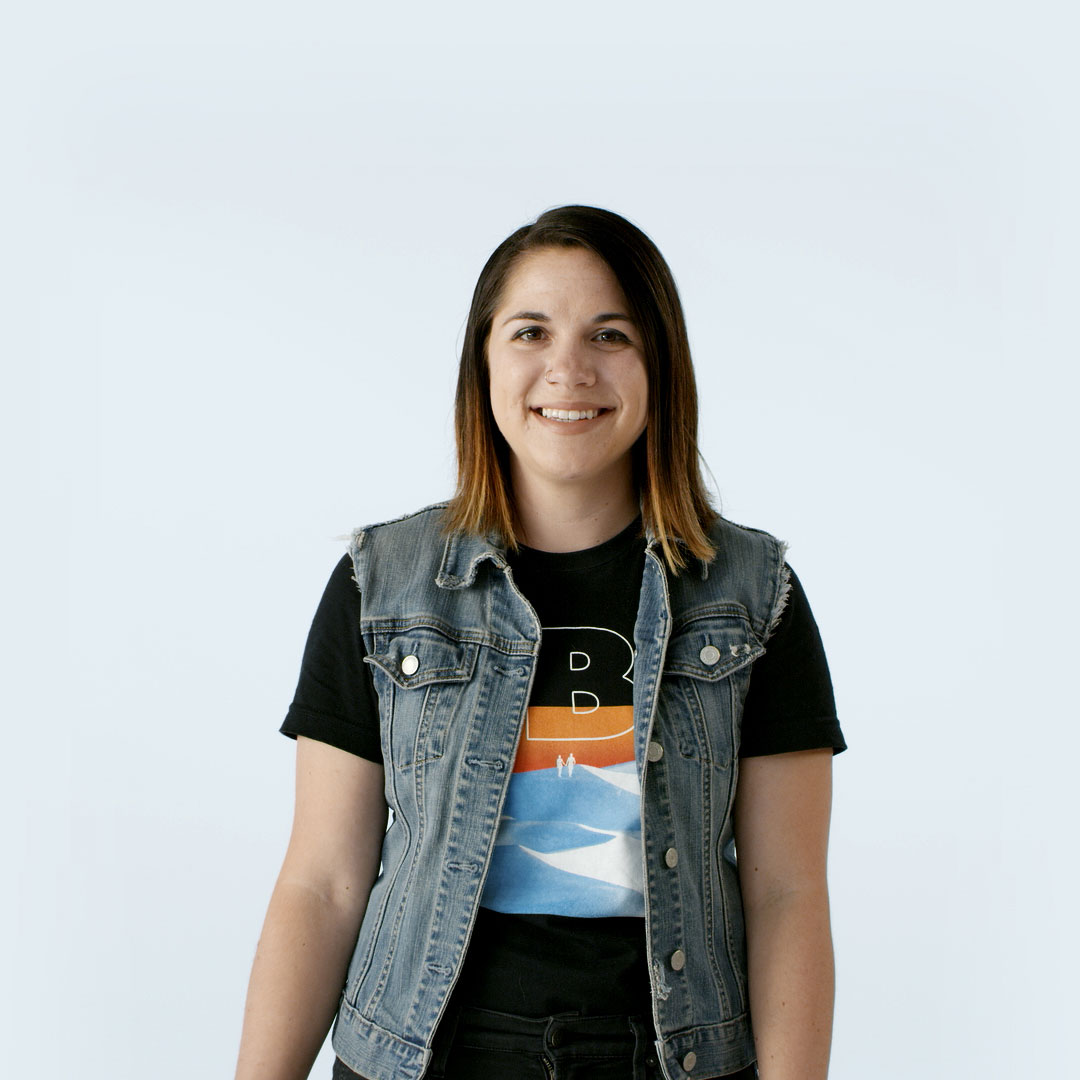 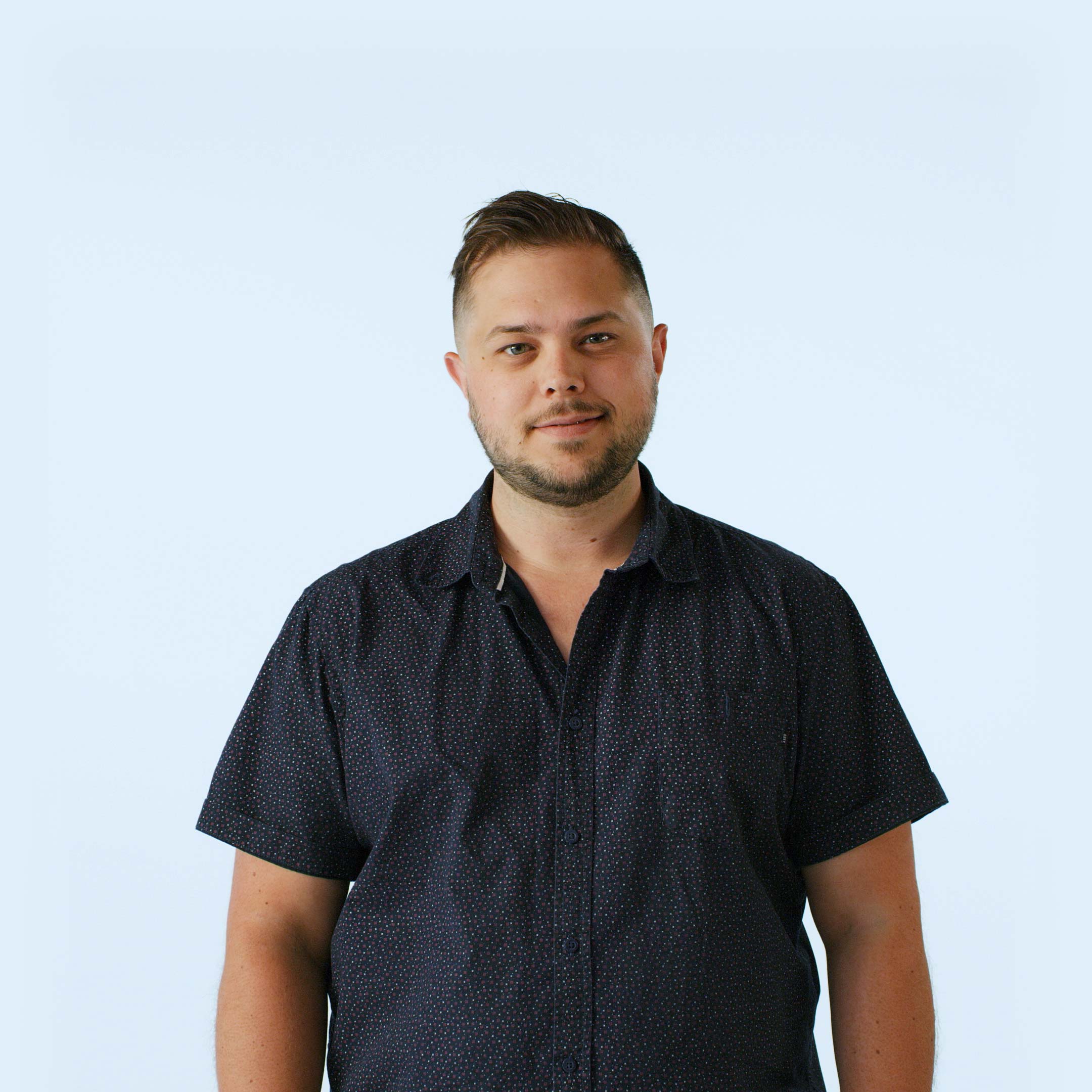